October ended up scurrying away from me this year.  And here we are in November with turkeys on the horizon.  We'll see if I can make two posts this month!

I was in the final show of the year at the Maine Art Gallery in Wiscasset this year.  I was pleased that one of my paintings made the show card and that we got such a nice write up in this paper.

And it's show season in the art world right now.  I've got a new monotype mixed media unique print at the MGNE (Monotype Guild of New England) show at the Silver Center for the Art, at Plymouth University, 114 Main St, Plymouth, NH 03264

I'm also working on a series of monotypes with mixed media I'm calling my French Series, as they include playing cards JK & I picked up someplace, that are French.  I had an artist friend of mine ask if I had any French heritage and I had to admit, that no, I'm merely Irish and English, but have loved the food and culture of France and of Quebec.  Matter of fact, the hubster and I tried to get married at his parents house on Bastille Day!  But because his parents lived just outside Milwaukee County, it wasn't possible so we got married on July 13th, a Friday and had our celebratory party on Bastille Day at his parents house with brats and beer.

The first in the series is Fouquet's Folly, soy ink monotype with mixed media elements, 8 x 8" and now hanging at the UMVA Gallery, inside the Portland Media Center, 516 Congress St., Portland, ME until the end of November. 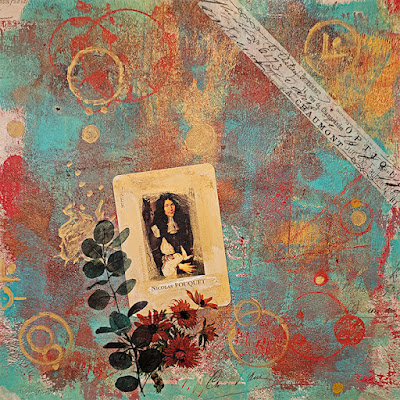 After making it, my friend Gano Haine suggested that I do a whole series, and I figured I had enough of the paper that was printed with antique images from French sources and playing cards to pull it off.  Historically the joke was on Fouquet, who was the Superintendent of Finances in France from 1653 until 1661 under King Louis XIV.  Apparently he threw a big party for the King, who then suspected him of stealing from the state treasury and threw his ass in jail.  It was also interesting to do some research on the characters from the deck.

Next came The Reincarnation of Cardinal Mazarin, but on a 12 x 12" cradled panel, as are the rest of the pieces in the series.  He was an Italian cardinal, diplomat, and politician who served as the Chief Minister to the King of France from 1642 until his death in 1661.  He collected diamonds. 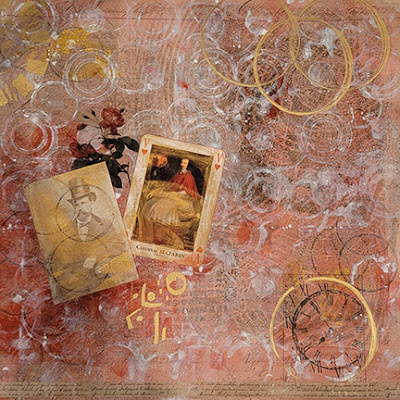 This piece will be going into a show next year at the Waterfall Arts Center in Belfast, ME with the other members of the Midcoast Chapter of the UMVA.  The cardinal made a pile of money working for the king, so I envisioned him coming back as a businessman in the 19th century.  I also began to add marks from this terrific gold leafing pen and also stamped it and added washi tape.

Then we have the Reincarnation of Anne of Austria, who became a queen as the wife of King Louis XIII from their marriage in 1615 until Louis XIII died in 1643. She reincarnates into a Vogue model. 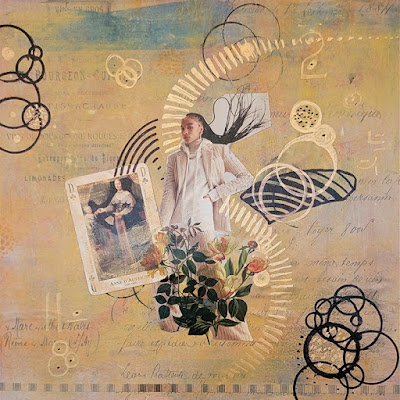 I think this piece will go into the January 2023 UMVA Midcoast show at the Camden Public Library.

We'll catch up to the rest of the series in the next post....  stay tuned!

Hi Ann! Glad to see you are busy, happy, and making wonderful art! Wishing you a happy November and Thanksgiving. Much love, Mary H.

Hey Mary.... you have a good turkey day too.... sending big XOXO to you, Bob and the rest of the family

'. . the proper artistic response to digital technology is to embrace it as a new window on everything that's eternally human,and to use it with passion, wisdom, fearlessness, and joy.' - Ralph Lombreglia
In Art, Truth and Reality begin when you no longer understand anything you do or know and there remains in you an energy, that much stronger for being balanced by opposition, compressed, condensed.