From Maine to Spain!


There is nothing like a travel adventure to make you look at the world and yourself a little differently.  When I received the news that I was a finalist in the Julia Margaret Cameron Competition that was certainly a feather in my cap.  But when I was invited to exhibit that fine art photographic collage at the 3rd Biennale of Photography in Malaga, Spain (a place I had never been) I was over the moon and began plotting a way to get to the artists' reception.  At first we hoped that Mimmo, (a foreign exchange student who lived for a year with my husband's family in Wisconsin in 1969-70 who is now a dear friend) would be able to meet us there.  But as luck would have it, a work situation interfered and he was unable to get to Malaga but suggested that we come visit him in Palermo.


It had been four years since our last visit to see him when I first when to Bacau, Romania to judge the Gala Star Solo Show Competition.  That was the same year the volcano in Iceland was spewing such ash into the atmosphere that flights over Northern Europe were cancelled.  JK's tickets to meet me there (and then travel to Venice to meet Mimmo) where cancelled and we ended up meeting up in Venice through sheer determination.  I was able to get on the first flight that was cleared to get out of Bucharest and JK ended up in a circuitous route going from Sacramento (where we lived at the time) to New York to Casablanca to Rome to Venice.  I had injured my knee in Bucharest and hobbled my way around Venice which wasn't ideal as walking is really the only way to get anywhere.

Luckily we didn't have as many strange events happening this time.  We used points to upgrade to business class on Delta and were sorely disappointed after having been spoiled by Lufthansa accommodations, especially by the food.  BIG Delta FAIL as it was terrible.   Only got about 3 hours of sleep on the plane so we were jet-lagged when we arrived about 9:30 in the morning.  Luckily at the Madrid airport duty free shop I spotted a bottle of Havana Club rum from Cuba - one of my favorites.  Granted it wasn't the seven year old, but it was a reserva and better than the aged rums we had tried to find in Portland after our first trip to Cuba.

By the time we got to the hotel, we knew we needed to stay up most of the day so we headed out after unpacking to explore our neighborhood, the La Latina district of the city where most of tapas bars are located.  Since it's an old part of the city with buildings dating back to the 17th century and some to the days of the Moorish Muslim Empire, they were a bit of a maze - like downtown Boston.

Apparently the Spanish, like New Englanders, paved the cow paths that wandered everywhere.  So, like cows, we grazed our way around.  A tapa here with a drink and a tapa there with Sangria and agua no-gas until we were exhausted and figured an hour or two disco nap wouldn't hurt.  So after a short siesta, we ventured out to have even more tapas for dinner.  In JK's research, he discovered a restaurant that translated in English was House of Mushrooms.  It was a grotto like place with only a few tables but a piano player squeezed in amongst the tables. They only had one sort of mushroom, large caps stuffed with garlic, olive oil and Iberian ham - deliciouso!  they also have a roast pig that is very good and we might go there again when we go back to Madrid for a few days before we fly home.

In Spain they talk about staying out so late they "kill the night", at least according to our Cuban photographer friends.  So we decided to give it our best shot and walked over the Plaza Mayor.  It really reminded us of the plazas in Cuba and shows how much Cuban architecture was influenced by the Spanish.  But we each had only between 3 to 5 hours of sleep, so after another glass of fabulous Spanish Rosato -all the rosés we had there were wonderful, some better than others but all very quaffable - it was remembering our way back to our hotel.

The small hotel we stayed, at Posada de Dragon, was very Spanish in that they served a small buffet  breakfast until 11 each morning.  Matter of fact I could easily slip into the Spanish way of life staying up to 1 or 2 in the morning, sleeping in to 10, lunch at 3 and dinner at 9.  Maybe I was Spanish in another life time!  Another great feature of our Dragon hotel was that it was a bar/restaurant as well.  We could always bring a nightcap up to our room.
Posted by Ann Tracy, Maine's Digital Alchemist & Artist at 11:33 AM No comments:

Did I ever tell you about my days as a critic?  During my final days at KGNR in Sacramento, I approached the General Manager (the Big Guy) after seeing all the automated equipment coming into the station, with an idea - I was quitting the morning drive news job but it wouldn't look like another rat leaving a sinking ship if I stayed at the station on a part time basis and did theatre and movie reviews!  (We call him the Big Guy because he did remind much of the staff of the GM on WKRP in Cincinnati.)  I only did that for a few months (I had to keep the reviews way too short) before I went over to KXPR, the public radio station where I knew the News Director (Russ Heimerich who is a PIO for the state of California) who used to work with me over at KGNR.

Of course they weren't paying me squat so after doing a great job for a year or so, I asked for a raise and was refused - so I quit to become a PR Consultant for small businesses and non profit groups.  But reviewing theatre is a very different animal than reviewing art and there's also the distinction of being a critic or being a reviewer.  When I got into critic mode, they always pulled me back even though I was careful to put the good with the "didn't work very well" comments.

I wish I had heard (and had the time and money to spend some time in NYC) for a free class on art criticism run by the Bruce High Quality Foundation University.  You can read about it here.

Wonder how they would have reviewed my latest little painting - it's from an idea I had back in the 90s and even though a very wonderful artist (Margaret Nomentana) is currently showing work in a group show at UNE where she's done the same thing - using acrylic paint skins on canvas - I had to realize my idea as well.  But I had to blab about it on the canvas first and then paint over that. 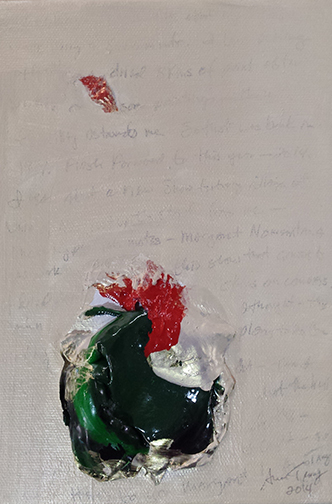 My photo is not that good as you can't see the golden shine on it... will tray for a better one later.  Letting Loose is only 8 x 6".  What would be a fair price for it?
Posted by Ann Tracy, Maine's Digital Alchemist & Artist at 4:47 PM No comments: 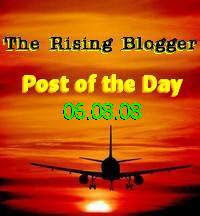